Much like an email client, Community Connect lets you view, label and archive messages as you receive them. Community Connect also keeps track of calls that are received on your channel so you can return any calls which may have been made to it.

Messages represent the incoming and outgoing interactions your Community Connect account has had with:

Unless submitted by the Surveyor App, all messages are sent to and from the channel(s) connected to your Community Connect account are stored in the messages tab, where they're organized into folders in the ﻿messages column on the left side of the page. 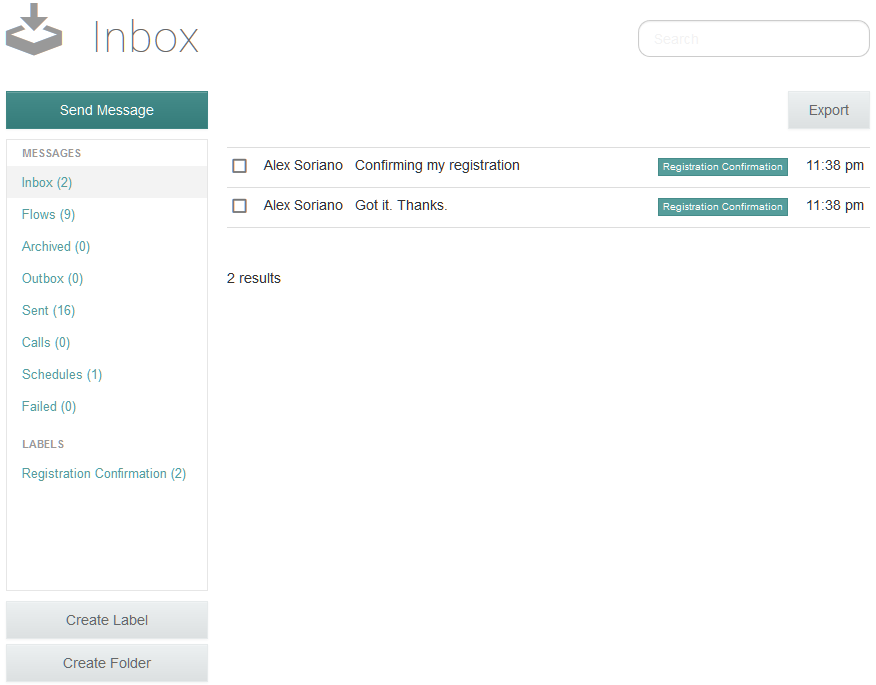 Messages stored in the "Inbox" folder include all incoming messages that haven't triggered or been received by a flow. Messages in this folder are sent by contacts that aren't active in a flow.

Messages stored in the "Flows" folder include messages received by your flows. Messages in this folder are sent by contacts who are active in flows at the time the messages are sent.

The "Calls" folder contains calls made to and from the channel connected to your Community Connect account. You are provided the date, direction, and duration of each call.

The "Scheduled" folder contains messages that have been scheduled to be sent in the future or on a recurring schedule. Navigate to this folder to view or edit scheduled messages.

The "Failed" folder contains messages that weren't able to send when broadcasted.

Each message is assigned a status represented by one of the following icons:

The "delivered" icon denotes a delivered message, and is followed by the text of the message.

The "sent" icon denotes a message that has been sent but hasn't returned a delivery receipt. Some carriers and channels aren't able to provide delivery receipts. These messages should be considered delivered unless they're present within the "Outbox" folder in the messages tab.

The contact icon denotes a message received from a contact, and is followed by the text of that message.

The broadcast icon denotes a message broadcast, and is followed by the number of contacts targeted by the message as well as its contents.

The caution icon denotes a message that has failed to send, and is followed by the text of the message.